For testing web applications, the best tool available by far is Burp Proxy. It is one of my preferred tools to perform security assessments. You can refer to the whitepaper and the slides for details of the talk. In this blog post I will discuss the setup and a short introduction of how to carry out such assessments. The pre-requisites for using this technique are:

You can download the code that I released at BlackHat for the demo from here. It is a plug-in template that does three things:

All the client-side jars should be placed in the lib folder provided by the plug-in. The plug-in will automatically import all the jars contained in this directory on startup. For the purpose of demonstration we would use a simple scenario where the JAVA serialized object is passed in a POST data of a HTTP request from the client to the server and vice-versa as shown in the figure below. 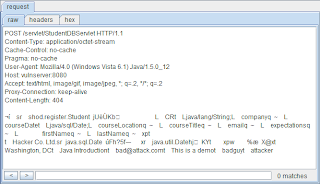 Once this sort of data is intercepted by Burp; our plug-in steps into action. Burp passes the entire message (headers + POST data) as a JAVA byte array to the plug-in which then splits the message into header and data and tries to de-serialize the JAVA Object. Once the JAVA Object is read, the plug-in spawns a (J)IRB shell exposing a variable obj which contains the JAVA Object. Now the pentester has the option of playing around with a complete development environment using the shell and editing the object at will. Once you are done modifying the object, you can use the helper methods to pack the object and create a new message (JAVA byte array) and return it to Burp to pass it to the application server.

For a more detailed demonstration watch the video